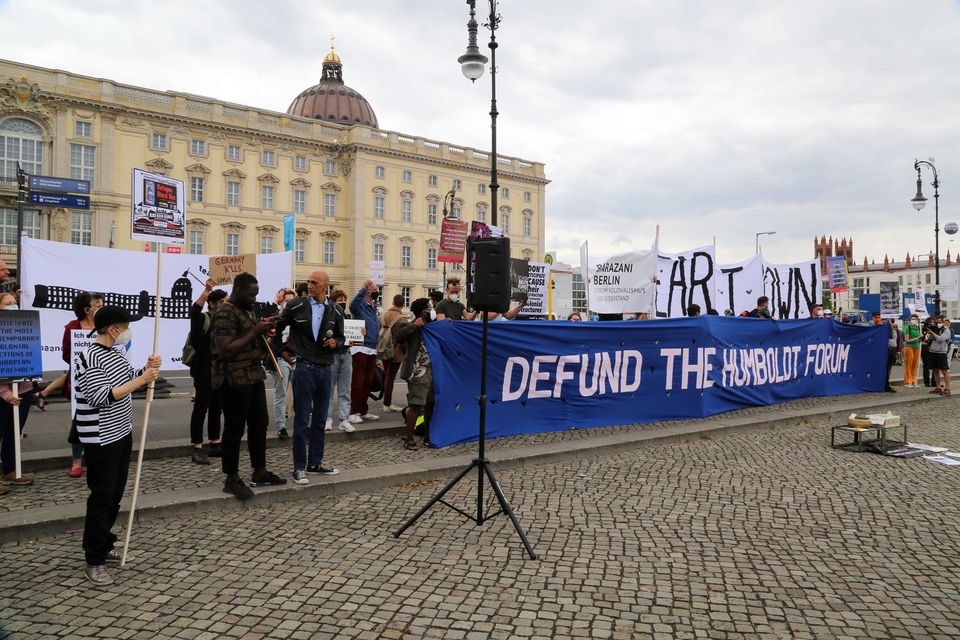 Many objects in the ethnological collections of “Stiftung Preußischer Kulturbesitz” are stained with the blood of colonial violence; others were obtained by force or stolen. For decades, BIPOC voices have called for restitution and apologies from Berlin museum’s for theft and genocide. And although the Prussian Cultural Heritage Foundation has agreed to “substantial restitution” (?) of the Benin bronzes in 2020, other restitution demands continue to be ignored, censored or skipped. For critics, it is less a question of ethnological objects or works of art. They primarily lament the isolation of sacred objects of their faith, bones of their ancestors or political insignia.

On September 22, the Coalition of Cultural Workers Against the Humboldt Forum and BARAZANI.berlin invite the public to a demonstration in the context of the opening of the ethnological collections of the “Humboldt Forum.” There, activists and artists will speak to the long and ongoing struggle for restitution.
Speakers at the demonstration:

This website uses cookies to improve your experience while you navigate through the website. Out of these, the cookies that are categorized as necessary are stored on your browser as they are essential for the working of basic functionalities of the website. We also use third-party cookies that help us analyze and understand how you use this website. These cookies will be stored in your browser only with your consent. You also have the option to opt-out of these cookies. But opting out of some of these cookies may affect your browsing experience.
Necessary immer aktiv
Necessary cookies are absolutely essential for the website to function properly. This category only includes cookies that ensures basic functionalities and security features of the website. These cookies do not store any personal information.
Non-necessary
Any cookies that may not be particularly necessary for the website to function and is used specifically to collect user personal data via analytics, ads, other embedded contents are termed as non-necessary cookies. It is mandatory to procure user consent prior to running these cookies on your website.
SPEICHERN UND AKZEPTIEREN